What is COMPETITIVE SOCCER?

Revolution United continues to produce championship caliber players and teams within Barnstead, Alton, New Durham, Wolfeboro, Chichester, Epsom, and other surrounding communities. Revs United started to bring these young athletes together at an earlier age, to continue growing with each other throughout the years.

Revolution United will participate in the New Hampshire Soccer League for Spring 2023.

What is "competitive" soccer?

Competitive, or club soccer, is defined by the caliber of play, which will be higher than local town, recreational soccer, and the level of competition will be greater. We will see teams from all over the state of New Hampshire, as well as some teams from Vermont, Maine and Massachusetts.

How much travel will there be?

Revolution United's competitive teams act as a "travel" soccer club. Travel will consist of a total of 3-4 "away" games only. Away games can be up to an hour away from our home locations (Barnstead / Alton).

How many games and practices should we expect?

Within the NHSL, there are 7 regular season games. Playoffs are for teams in the U11-U19 divisions and only for those teams who qualify (typically top 2-4 teams per division qualify). There will be 3-4 home games and 3-4 away games. Home games are played at Prospect Mountain High School. Practices are up to the coaches discretion, but expect a minimum of 1-2 practice nights during the week. All games are played on either Saturday's or Sunday's. Practices are held at our practice facilities, which the majority is Prospect Mountain High School.

My child would like to play another sport in the Spring as well, is this allowed?

We know that there are many options during the Spring season with great sports such as lacrosse, baseball, etc. We encourage players that would like to participate in more than one to just inform their coaches at the beginning of the season. While this is a competitive soccer club, we know that we have some very talented athletes and we want to work with everyone. If we know ahead of time, we can work practices or game schedules around as needed and as the league will allow to increase the level of participation.

Being a championship club, what will this cost for a season?

Revolution United was formed to give all players an opportunity to play. We have some of the lowest costs in competitive soccer within the state. Competitive Soccer cost is between $100-$275. Uniform cost is included.

Is Revs United looking for coaches?

Revolution United FC is always building our "bench". Many of the coaches we currently have on staff have their coaching licenses from US Soccer Federation, US Youth Soccer, US Soccer and the National Soccer Coaches Association of America (NSCAA). If you are interested in becoming a coach for Revolution United, please email us at admin@revsunited.com 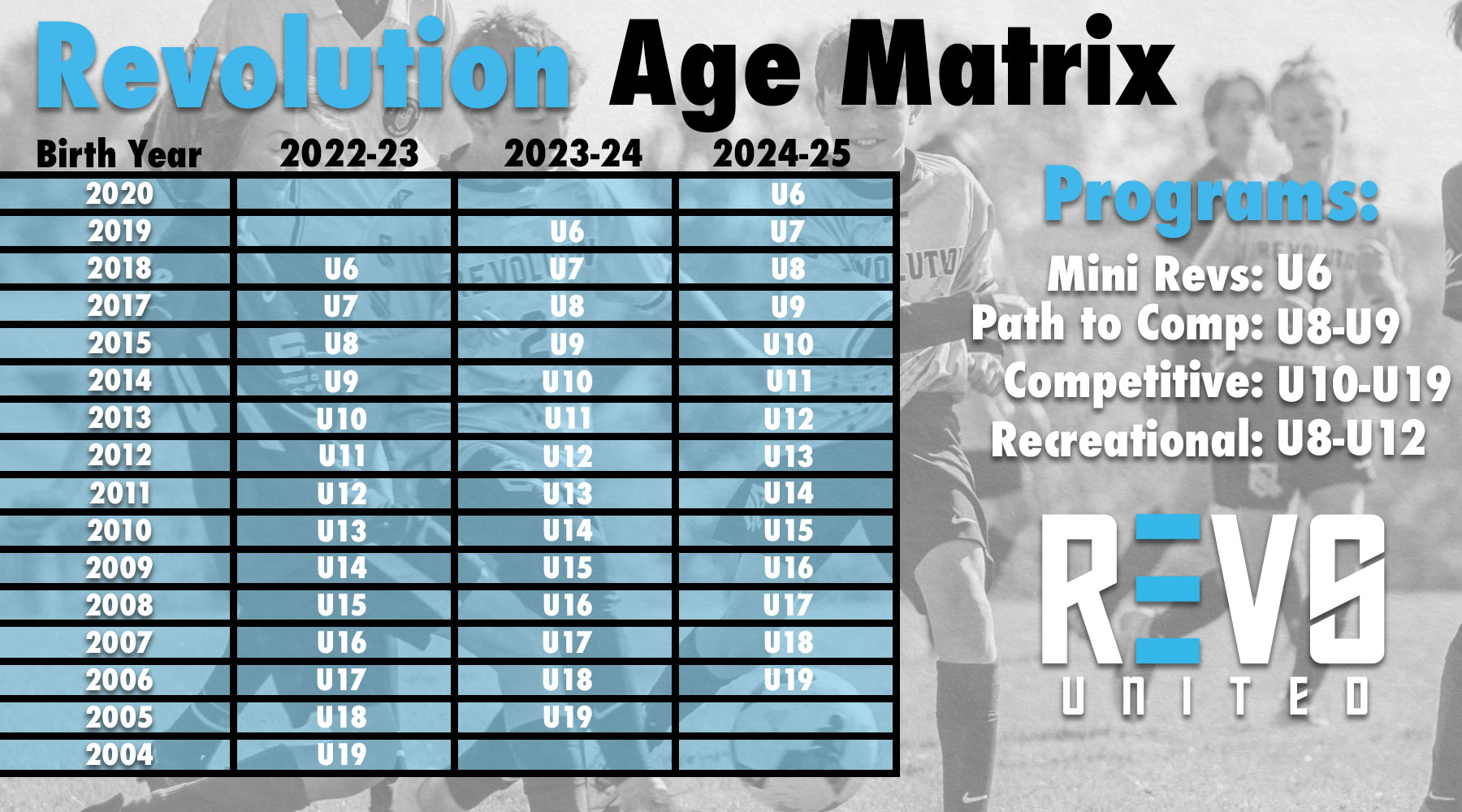